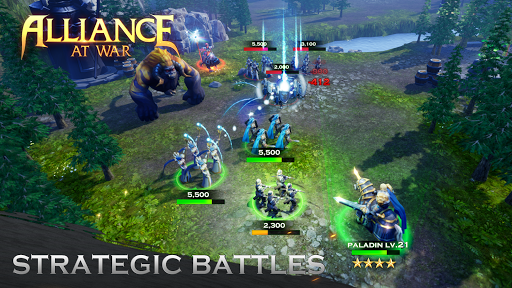 [Alliance at war] combines both Real-time wars and round-based battles! As you move forward, legendary heroes will join your team to help you lead troops to conquer the demon cave, look for treasures, and kill enemies, thereby becoming an army that makes the enemy tremble with fear! Right here, you can also work together with your allies to attack territory, seize ancient artifacts, occupy Stronghold and Royal city, and make a name for yourself in the cross-server war that starts twice a month!

Game Features:
⚔️Unique Hero System
The hero plays a significant role in the game. Unique heroes will join you as the game progresses, including the Commander who is good at counterattacks, the Sorceress who is able to melt enemy armor with flames, the Paladin who enhances troop morale and brings blessings, and the Oracle who helps you improve luck in battle. However, the speed with which you recruit and train them greatly affects your troops’ combat performance and strategy abilities!

⚔️Diversified Unit Strategies
Various types of units are available for recruitment here, including Infantry, Mage, Catapult, Cavalry, Ballista, and Archer. With different stats, they’re able to counter each other. Besides, you’re free to boost your might by upgrading your troops with enhanced equipment.

⚔️Rare Ancient Artifact
The reappearance of the lost artifact provoked a fierce battle in the kingdom. The player who completes the server quest first will get the artifact with unique skills and buffs. But be careful, the enemies stand ready to take it away from you!

⚔️Cross-Server War
You’re free to sign up for this war every two weeks to compete with alliances from different servers around the world. In this event, you can invade your opponents’ Stronghold on other servers to conquer them and plunder spoils, thus ranking top in the event and winning handsome rewards!

⚔️The Stronghold Fighting Day
Players can participate in the Stronghold event every week. With the occupation of the rare Stronghold, the alliance not only wins glory, but also enjoys the privileges it brings, including resource protection, units upgrade, combat protection, and other special features. Also, the strong alliance buff and rich weekly spoil rewards will help your alliance gain an advantage!

⚔️War of Throne
It is an event where you need to occupy the Blood Palace and activate the Dark Tower to attack the Royal City with your allies! The alliance leader who wins the war will become the King, enjoying privileges and wielding supreme power!

⚔️Various Alliance Events
Varieties of alliance events are waiting to be explored, such as Arena, Cave team-up, Pappas’ Treasure, Spirit Orb Collection, Hunting event, etc. These events require both strength and collaboration, and you’ll get great rewards to help you grow faster!

⚔️Update and Support
We will continue to breathe new life into the game while making further progress. In Alliance at war, you can reach out to our support team for real-time help whenever you have problems and share your ideas to improve the game! We look forward to meeting you in this magical world and working with you to create an increasingly better game!

Other optimizations:
1. Players who are banned cannot speak on all channels.
2. Fixed other known issues.

OBB file (Alliance at War: Dragon Empire – Strategy MMO) is a file that developers create along with some APK packages to support the application. The OBB files contain bundles of large assets.

Preparations You Make Before Travel