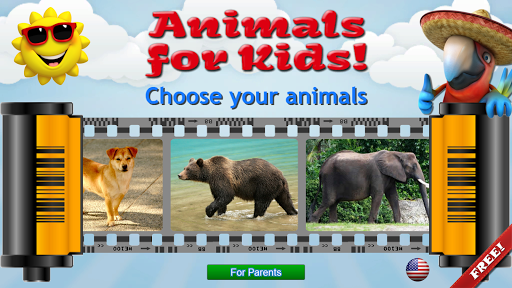 Together with your child, you can watch wonderful images of different animals, all while learning their names and listen to the animals’ unique sounds!

These carefully selected photographs allow your child to not only learn the names of the various animals, but also glimpse into the animal’s beautiful world and everything it offers!

After your child looks over and experiences the animal flashcards, there is a fun game waiting for them, which tests how much they’ve understood. Regardless of the number of correct answers, the player earns stars and young talent is rewarded with thunderous applause and balloons!

In the free app, the animals are divided into three groups: “domestic animals and pets”, “forest animals”, and “animals of the world” (animals that live in Asia, Africa, the Arctic, and Antarctic). Additional animals, like “birds”, “insects”, and “world of water” (fish and water-thriving animals), are available in the full version of the application.

A significant feature of this app is that there are no unrealistic drawings. Instead, full-length beautiful pictures are used that resemble actual animals (as they look in real life), which helps the child easily remember their names and features.

Do you have older children in primary school? If so, this educational game will also come in handy for them because in addition to English, the app supports German, Spanish, French and some other foreign languages.

Playing these types of games with flashcards has been proven to aid students in quickly learning a foreign language. They can discover new words and are able to easily impress their teachers and classmates!

Your child doesn’t even need to know how to read with this app! Its simple interface and voice prompts allow even the youngest kid to play and learn the names of the animals by themselves! After playing the game, be sure to visit the zoo or pet store with your child – you’ll be happy and impressed as they present their newly acquired knowledge of all the animals they see!

Experience has shown that for most children, viewing and learning from bright and vivid images becomes a favorite pastime and having them play this game often reinforces their knowledge. According to Glenn Doman, an American physical therapist and founder of the “The Institutes for The Achievement of Human Potential”, training just 5 – 10 minutes a day stimulates the development of various parts of the brain. This allows for the development of a photographic memory, which means your could can develop faster than her or his peers, and become more open to the vast knowledge of the world.

Doman is undoubtedly right! The younger the child, the easier they absorb new information.

OBB file (Animals for Kids, Planet Earth Animal Sounds) is a file that developers create along with some APK packages to support the application. The OBB files contain bundles of large assets.