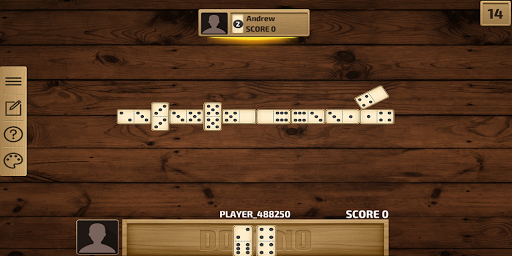 The dominos gaming pieces make up a domino set, sometimes called a deck or pack. The traditional Sino-European domino set consists of 28 dominoes, colloquially nicknamed bones, cards, tiles, tickets, stones, or spinners. Each domino is a rectangular tile with a line dividing its faceinto two square ends. Each end is marked with a number of spots or is blank. A domino set is a generic gaming device, similar to playing cards or dice, in that a variety of games can be played with a set. There are some extended domino sets (double 9 and double 12). They are used for Mexican train, Chicken Foot and similar games. Each country has it’s own set of dominoes games: England – muggins (All fives), scandinavian countries – Bergen, Mexico – Mexican train, Spain – Matador.
The earliest mention of dominos is from Song Dynasty China. Dominoes first appeared in Italy during the 18th century, and although it is unknown how Chinese dominos developed into the modern game.

Blocking game
The most basic dominos variant is for two players and requires a double six set. The 28 domino tiles are shuffled face down and form the stock or boneyard. Each player draws seven tiles; the remainder are not used. Once the players begin drawing tiles, they are typically placed on-edge before the players, so that each player can see his own domino tiles, but none can see the value of other players’ tiles. Every player can thus see how many tiles remain in the other players’ hands at all times during gameplay. One player begins by downing (playing the first tile) one of their tiles. In different games first tiles are also different. In Muggins player should start with the highest double (6-6), in Bergen the first move should be 0-0, in Mexican train each round starts with the next lower double. This tile starts the line of play, a series of tiles in which adjacent tiles touch with matching, i.e. equal, values. The players alternately extend the line of play with one tile at one of its two ends. The game ends when one player wins by playing their last tile, or when the game is blocked because neither player can play. If that occurs, whoever caused the block gets all of the remaining player points not counting their own.
Scoring game
Players accrue points during game play for certain configurations, moves, or emptying one’s hand. Most scoring games use variations of the draw game. In Muggins (All fives) player must make the open ends of the layout add up to 5s or a multiple of five (5s, 10, 15, 20, etc.) In bergen player scores when numbers on the open ends are equal. If a player does not call “domino” before the tile is laid on the table, and another player says ‘domino’ after the tile is laid, the first player must pick up an extra domino. In Mexican train the double zero domino is scored as 50 points.
Draw game
In a draw game (blocking or scoring), players are additionally allowed to draw as many tiles as desired from the stock before playing a tile. The score of a game is the number of pips in the losing player’s hand plus the number of pips in the stock. Most rules prescribe that two tiles need to remain in the stock. The Draw game is often referred to as simply “dominos”.

Mexican train has arrived! Enjoy our dominos game with the full set of this game varieties! You can play domino online (Draw game, Block game and Muggins (All fives)) for free!
Bug fixes.

OBB file (Domino) is a file that developers create along with some APK packages to support the application. The OBB files contain bundles of large assets.